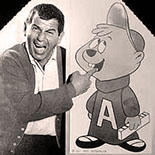 Rostom Sipan “Ross” Bagdasarian (January 27, 1919 – January 16, 1972) was an American pianist, singer, songwriter, actor and record producer of Armenian descent. He was better known by the stage name David Seville. Bagdasarian was the creator of Alvin and the Chipmunks.

The first Chipmunk record, “The Chipmunk Song”, had Bagdasarian doing all the voices. (The spoken coda, when played slowly, reveals Bagdasarian enacting the roles of Theodore, Simon, and Alvin.) Despite claims that Bagdasarian employed female background singers and used less speed manipulation on later recordings, examination of recordings as late as the Canned Heat “Chipmunk Song” spoof in 1968 proves he was still performing the voices himself. Playing a 45 rpm record at 33 1/3 as some have recommended does not sufficiently lower the pitch; it must be played at one-half normal speed, either by transferring to tape or playing a 33 1/3 LP at the 16 2/3 speed still found on some older turntables. (The later Chipmunk records produ 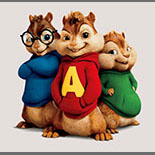 ced by his son do employ studio background singers, usually male; the Chipettes however are usually sung by female vocalists.)

After the success of “The Chipmunk Song”, a series of follow-up hit singles were quickly released, also on Liberty Records. “Alvin’s Harmonica” was the second, “Ragtime Cowboy Joe” the third and “Alvin’s Orchestra” the fourth, with B-sides (like “Mediocre” and “Almost Good”) sometimes featuring non-chipmunk semi-comedic concepts. Albums continued this trend, the first album being released on red vinyl, successfully continuing well into the 60s with an album of the Chipmunks singing various early hits of the Beatles in 1964. (Even a Chipmunk album of punk and new wave songs was released in the 1980s by Ross Jr.)