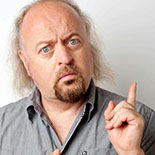 Bailey is well known for his role in Black Books and for his appearances on Never Mind the Buzzcocks, Have I Got News for You, and QI as well as his extensive stand-up work.