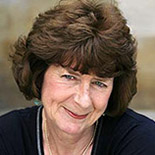 Her 1975 appearance on the television talent show Opportunity Knocks led to a variety of appearances on TV and radio shows, a one-woman touring stage show and performing before the Queen.