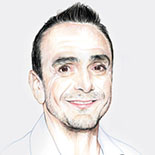 He is known for being one of the voice actors on the animated television sitcom The Simpsons (1989–present), voicing Moe Szyslak, Apu Nahasapeemapetilon, Chief Wiggum, Comic Book Guy, Carl Carlson and numerous others. After attending Tufts University, Azaria joined the series with little voice acting experience, but became a regular in its second season, with many of his performances on the show being based on famous actors and characters.