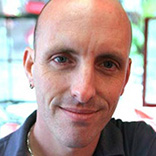 His honors include the Amy Lowell Traveling Poetry Scholarship, the Joseph Brodsky Rome Prize Fellowship from the American Academy of Arts and Letters, the US-Japan Creative Artists Exchange Fellowship, the Alfred Hodder Fellowship from Princeton University, a Dobie Paisano Residency, and a National Endowment for the Arts fellowship. He has also won the Anthony Hecht Poetry Prize, and he has been a Fulbright Scholar at Universidad de los Andes in Bogota, Colombia. An avid musician, Arnold has also performed as a member of the band Iris.

Of many reasons I love you here is one

it makes you terribly terribly sad

but you are wrong

MEDITATION ON A GRAPEFRUIT
Craig Arnold