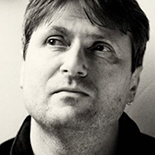 In 2004, Armitage was elected a Fellow of the Royal Society of Literature and was appointed Commander of the Order of the British Empire (CBE) in the 2010 Birthday Honours. He is a vice president of the Poetry Society and a patron of the Arvon Foundation.

My girlfriend won me in a sealed auction but wouldn’t
tell me how much she bid. “Leave it, Frank. It’s not
important. Now go to sleep,” she said. But I was restless.
An hour later I woke her and said, “Give me a ballpark
figure.” “I’m tired,” she replied. I put the light on. “But
are we talking like thousands here?” She rolled away,
pulled the cotton sheet over her head, mumbling, “You’re
being silly, Frank.” I said, “Oh, being silly am I? So not
thousands. Just a couple of hundred, was it?” “I’m not
telling you, so drop it,” she snarled. By now I was wide
awake. “Fifty, maybe? A tenner?” She didn’t say anything,
and when Elaine doesn’t say anything I know I’m getting
close to the truth. Like the other day with the weed killer.
I said, “Maybe you weren’t bidding for me at all. Maybe
you were after a flat-screen telly or a home sun-tanning
unit, and you got me instead. Tell me, Elaine. Tell me
what I’m worth, because right now I don’t know if I’m
an original Fabergé egg or just something the cat dragged
in.” Elaine surfaced from under the covers and took a sip
of water from the glass on the bedside table. “Frank, listen.
What does it matter if it was a million pounds or a second-
class stamp? You’re priceless, OK? You’re everything to
me. Don’t spoil it by talking about money.” Then she took
my hand and held it against her breast and said, “Do you
want to make love?” I answered with my body, tipping
every last quicksilver coin into her purse.

But that night I dreamed of the boy-slave winning his
freedom by plucking a leaf from Diana’s golden bough,
and long before dawn, with bread in my knapsack and
the wind at my back, I strode forth.