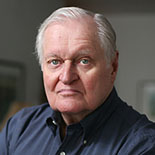 Ashbery published more than twenty volumes of poetry and won nearly every major American award for poetry, including a Pulitzer Prize in 1976 for his collection Self-Portrait in a Convex Mirror. Renowned for its postmodern complexity and opacity, Ashbery’s work still proves controversial. Ashbery has stated that he wishes his work to be accessible to as many people as possible, and not to be a private dialogue with himself. At the same time, he once joked that some critics still view him as “a harebrained, homegrown surrealist whose poetry defies even the rules and logic of Surrealism.”

Sitting between the sea and the buildings
He enjoyed painting the sea’s portrait.
But just as children imagine a prayer
Is merely silence, he expected his subject
To rush up the sand, and, seizing a brush,
Plaster its own portrait on the canvas.

So there was never any paint on his canvas
Until the people who lived in the buildings
Put him to work: “Try using the brush
As a means to an end. Select, for a portrait,
Something less angry and large, and more subject
To a painter’s moods, or, perhaps, to a prayer.”

How could he explain to them his prayer
That nature, not art, might usurp the canvas?
He chose his wife for a new subject,
Making her vast, like ruined buildings,
As if, forgetting itself, the portrait
Had expressed itself without a brush.

Slightly encouraged, he dipped his brush
In the sea, murmuring a heartfelt prayer:
“My soul, when I paint this next portrait
Let it be you who wrecks the canvas.”
The news spread like wildfire through the buildings:
He had gone back to the sea for his subject.

Imagine a painter crucified by his subject!
Too exhausted even to lift his brush,
He provoked some artists leaning from the buildings
To malicious mirth: “We haven’t a prayer
Now, of putting ourselves on canvas,
Or getting the sea to sit for a portrait!”

Others declared it a self-portrait.
Finally all indications of a subject
Began to fade, leaving the canvas
Perfectly white. He put down the brush.
At once a howl, that was also a prayer,
Arose from the overcrowded buildings.

They tossed him, the portrait, from the tallest of the buildings;
And the sea devoured the canvas and the brush
As though his subject had decided to remain a prayer.

These are amazing: each
Joining a neighbor, as though speech
Were a still performance.
Arranging by chance

To meet as far this morning
From the world as agreeing
With it, you and I
Are suddenly what the trees try

To tell us we are:
That their merely being there
Means something; that soon
We may touch, love, explain.

And glad not to have invented
Such comeliness, we are surrounded:
A silence already filled with noises,
A canvas on which emerges

A chorus of smiles, a winter morning.
Placed in a puzzling light, and moving,
Our days put on such reticence
These accents seem their own defense.

The room I entered was a dream of this room.
Surely all those feet on the sofa were mine.
The oval portrait
of a dog was me at an early age.
Something shimmers, something is hushed up.

We had macaroni for lunch every day
except Sunday, when a small quail was induced
to be served to us. Why do I tell you these things?
You are not even here.