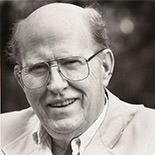 Archie Randolph Ammons (February 18, 1926 – February 25, 2001) was an American Poet who won the annual National Book Award for Poetry in 1973 and 1993. He wrote about humanity’s relationship to nature in alternately comic and solemn tones.

AN IMPROVISATION FOR ANGULAR MOMENTUM
A. R. Ammons

Perhaps the death mother like the birth mother
does not desert us but comes to tend
and produce us, to make room for us
and bear us tenderly, considerately,
through the gates, to see us through,
to ease our pains, quell our cries,
to hover over and nestle us, to deliver
us into the greatest, most enduring
peace, all the way past the bother of
recollection,
beyond the fine work of frailty,
the mishmash house of the coming & going,
creation’s fringes,
the eddies and curlicues

I.
It is not enough to  be willing to come out of the dark
and stand in the light,
all hidden things brought into sight, the damp
black spaces,
where fear, arms over its head, trembles into blindness,
invaded by truth-seeking light:
it is not enough to desire radiance, to be struck by
radiance: external light
throws darkness behind its brilliance, the division
nearly half and half:
it is only enough when the inner light
kindles to a source, radiates from its sphere to all
points outwardly: then, though
surrounding things are half and half with
light and darkness, all that is visible from the source
is light:
it is not enough to wish to cast light: as much
darkness as light is made that way: it is only
enough to touch the inner light of each surrounding thing
and hope it will itself be stirred to radiance,
eliminating the shadows that all lights give it,
and realizing its own full sphere:
it is only enough to radiate the sufficient light
within, the
constant source, the light beyond all possibility of night.

in separating light from darkness
have we cast into death:
in attaining the luminous,
made, capable self,
have we
brought error
to perfection:
in naming have we divided what
unnaming will not divide:

in coming so far,
synthesizing, enlarging, incorporating, completing
(all the way to a finished Fragment)
have we foundered into arrival:

in tarring, calking, timbering,
have we kept our ship afloat
only to satisfy all destinations
by no departures;
only to abandon helm,
sailcloth, hemp, spar;
only to turn charts
to weather, compass to salt, sextant
to sea:

as far words will let us go, we have
voyaged: now
we disperse the ruin of our gains
to do a different kind of going
that will
become less and
less
voyaging

Previous
Next
More A. R. Ammons