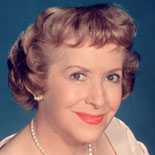 For contributions to the television industry, Gracie Allen was honored with a star on the Hollywood Walk of Fame at 6672 Hollywood Boulevard. She and George Burns are also both members of the Television Hall of Fame, having earned joint induction in 1988.