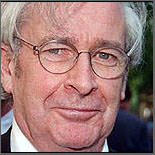 He was a religious skeptic (according to Allen, “what you might call a practicing atheist”, and often joked, “I’m an atheist, thank God”) as a result of his deeply held objections to the rigidity of his strict Catholic schooling. Consequently, religion became an important subject for his humor, especially the Roman Catholic Church and the Church of England, generally mocking church customs and rituals rather than beliefs.

At the end of his act Allen would always raise his glass and quietly toast his audience with the words “Thank you, goodnight and may your God go with you”, an original and inclusive catchphrase that typified Allen’s amiable style.

Along with his seated stand-up routines, his television shows were interspersed with filmed sketch comedy.