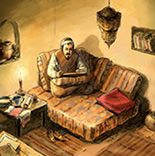 Yehuda Alharizi, also Judah ben Solomon Harizi or al-Harizi, was a Jewish rabbi, translator, poet and traveler active in Spain in the Middle Ages (1165 – 1225). He was supported by wealthy patrons, to whom he wrote poems and dedicated compositions.

He was a rationalist, conveying the works of Maimonides and his approach to rationalistic Judaism. He translated Maimonides’ Guide for the Perplexed and some of his Commentary on the Mishnah, as well as the Mahbarot Iti’el of the Arab poet al-Hariri, from the Arabic to Hebrew.

A flashing sword in a warrior’s hand—
a flame sent out among them.

Friends asked me what it was.
Word, I answered, from a sage’s tongue.

A LOVER WANDERED
Yehuda AlhariziA lover wandered down to the stream—
desire’s pain like a wound through him,
and there he saw a woman washing
the soiled shirt of his friend by the spring.

He kissed it in honor of the one who’d worn it,
not because its fabric was fine—
for there are men who’d gladly drink
vinegar so as to remember wine.