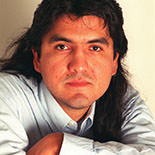 Much of his writing draws on his experiences as a Native American growing up on the Spokane Indian reservation.

Among his honors and awards are poetry fellowships from the Washington State Arts Commission and the National Endowment for the Arts and a Lila Wallace-Reader’s Digest Writers’ Award. He has also received the Stranger Genius Award, a Boston Globe–Horn Book Award, a National Book Award, a Pushcart Prize, the PEN/Malamud Award, and a citation as “One of 20 Best American Novelists Under the Age of 40” from Granta magazine.

I wanted to walk outside and praise the stars,
But David, my baby son, coughed and coughed.
His comfort was more important than the stars

So I comforted and kissed him in his dark
Bedroom, but my comfort was not enough.
His mother was more important than the stars

So he cried for her breast and milk. It’s hard
For fathers to compete with mothers’ love.
In the dark, mothers illuminate like the stars!

Dull and jealous, I was the smallest part
Of the whole. I know this is stupid stuff
But I felt less important than the farthest star

As my wife fed my son in the hungry dark.
How can a father resent his son and his son’s love?
Was my comfort more important than the stars?

A selfish father, I wanted to pull apart
My comfortable wife and son. Forgive me, Rough
God, because I walked outside and praised the stars,
And thought I was more important than the stars.

GRIEF CALLS US TO THE THINGS OF THIS WORLD
Sherman Alexie

The eyes open to a blue telephone
In the bathroom of this five-star hotel.

I wonder whom I should call? A plumber,
Proctologist, urologist, or priest?

Who is most among us and most deserves
The first call? I choose my father because

I say, “Can I talk to Poppa?” She gasps,
And then I remember that my father

How did I forget?” “It’s okay,” she says.
“I made him a cup of instant coffee

This morning and left it on the table—
Like I have for, what, twenty-seven years—

And I didn’t realize my mistake
Until this afternoon.” My mother laughs

And sing our praise to forgetfulness
Before they slap our souls with their cold wings.

Those angels burden and unbalance us.
Those fucking angels ride us piggyback.

Those angels, forever falling, snare us
And haul us, prey and praying, into dust.

THE POWWOW AT THE END OF THE WORLDSherman Alexie