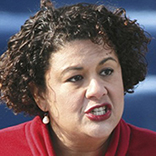 Elizabeth Alexander (born May 30, 1962) is an American poet, essayist, playwright, and a university professor.

She composed and delivered “Praise Song for the Day” for the inauguration of President Barack Obama. The poem has been published as a small book from Graywolf Press. In addition, she has published five books of poems: The Venus Hottentot (1990), Body of Life (1996), Antebellum Dream Book (2001), American Sublime (2005), which was one of three finalists for the Pulitzer Prize and was one of the American Library Association’s “Notable Books of the Year;” and her first young adult collection (co-authored with Marilyn Nelson), Miss Crandall’s School for Young Ladies and Little Misses of Color (2008 Connecticut Book Award). Her two collections of essays are The Black Interior (2004) and Power and Possibility (2007), and her play, “Diva Studies,” was produced at the Yale School of Drama.

Professor Alexander is the first recipient of the Alphonse Fletcher, Sr. Fellowship for work that “contributes to improving race relations in American society and furthers the broad social goals of the U.S. Supreme Court’s Brown v. Board of Education decision of 1954.” She is the 2007 winner of the first Jackson Prize for Poetry, awarded by Poets & Writers, Inc. Other awards include a National Endowment for the Arts Fellowship, two Pushcart Prizes, the George Kent Award, given by Gwendolyn Brooks, a Guggenheim fellowship as well as the Quantrell Award for Excellence in Undergraduate Teaching at University of Chicago. She is currently chair of the African American Studies Department at Yale University.

I am lazy, the laziest
girl in the world. I sleep during
the day when I want to, ’til
my face is creased and swollen,
’til my lips are dry and hot. I
eat as I please: cookies and milk
after lunch, butter and sour cream
on my baked potato, foods that
slothful people eat, that turn
yellow and opaque beneath the skin.
Sometimes come dinnertime Sunday
I am still in my nightgown, the one
with the lace trim listing because
I have not mended it. Many days
I do not exercise, only
consider it, then rub my curdy
belly and lie down. Even
my poems are lazy. I use
syllabics instead of iambs,
prefer slant to the gong of full rhyme,
write briefly while others go
for pages. And yesterday,
for example, I did not work at all!
I got in my car and I drove
to factory outlet stores, purchased
stockings and panties and socks
with my father’s money.

To think, in childhood I missed only
one day of school per year. I went
to ballet class four days a week
at four-forty-five and on
Saturdays, beginning always
with plie, ending with curtsy.
To think, I knew only industry,
the industry of my race
and of immigrants, the radio
tuned always to the station
that said, Line up your summer
job months in advance. Work hard
and do not shame your family,
who worked hard to give you what you have.
There is no sin but sloth. Burn
to a wick and keep moving.

I avoided sleep for years,
up at night replaying
evening news stories about
nearby jailbreaks, fat people
who ate fried chicken and woke up
dead. In sleep I am looking
for poems in the shape of open
V’s of birds flying in formation,
or open arms saying, I forgive you, all.