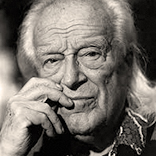 Rafael Alberti Merello (December 16, 1902 – October 28, 1999) was a Spanish poet, a member of the Generation of ’27. He is considered one of the greatest literary figures of the so-called Silver Age of Spanish Literature, and he won numerous prizes and awards. He died  at the age of 96. After the Spanish Civil War, he went into exile because of his Marxist beliefs. On his return to Spain after the death of Franco, he was named Hijo Predilecto de Andalucía in 1983 and Doctor Honoris Causa by the Universidad de Cádiz in 1985.

None of us understood the night secret of the blackboards
nor why the armillary sphere got excited only when we looked at it.
We only knew that a circumference doesn’t have to be round
and that a lunar eclipse confuses flowers
and sets the birds ahead.

None of us understood anything:
not why our fingers were of India ink
nor why the evening closed compasses to open books at dawn.
We only knew that something straight, if it wants, can be curved or broken
and that the wandering stars are children who don’t know arithmetic.

They’ve uprooted a tree. Only this morning
the wind, the sun and all the birds still
were simply kissing it. It was
happy and young, frank and straight,
with a clear, heavenly calling,
and a high starry future.
This afternoon, it lies like a child
dug from the cradle, the sweet
legs broken, the head sunk,
sprawled sadly on the ground,
a ruin in leaves,
in grief still green, in grief.
Tonight I’ll go out—when no one
is watching, when it’s all alone—
and close its eyes and sing for it
the same song the passing wind
whispered to it this morning.

The candles have shed
every tear they had.
They can’t cry anymore.
I begin to see. Darkness
is my only company.