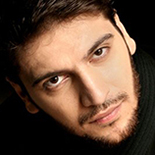 In 2003 Yusuf released his first album “Al-Mu`allim” at the age of 23, selling over seven million copies. Following the release of his second album “My Ummah” in 2005, Yusuf was heralded as “Islam’s Biggest Rock Star” by Time magazine for his success in attracting a relatively young fan base from diverse regions across the world, many of whom were of Muslim backgrounds. Yusuf has sold over 21.5 million albums. In October 2010, Yusuf’s third official album “Wherever You Are” was launched, manifesting his self-coined genre “Spiritique”. Yusuf is involved in humanitarian initiatives, supporting, among others, Islamic Relief and Save the Children.

TRY NOT TO CRYLyrics by Sami Yusuf

Isam:
‘Ayn Jalut where David slew Goliath
This very same place that we be at
Passing through the sands of times
This land’s been the victim of countless crimes
From Crusaders and Mongols
to the present aggression
Then the Franks, now even a crueller oppression
If these walls could speak,
imagine what would they say

For me in this path that I walk on
there’s only one way
Bullets may kill, bones may break
Still I throw stones like David before me and I say

You, you’re not aware
That we’re aware
Of your despair
Your nightmares will end
This I promise, I promise

Lenny:
No llores, no pierdas la fe
La sed la calma el que haze
Agua de la arena
Y tu que te levantas con orgullo entre las piedras
Haz hecho mares de este polvo
Don’t cry, don’t lose faith
The one who made water come out of the sand
Is the one who quenches the thirst
And you who rise proud from between the stones
Have made oceans from this dust

Waqas:
I throw stones at my eyes
’cause for way too long they’ve been dry
Plus they see what they shouldn’t from oppressed babies to thighs
I throw stones at my tongue
’cause it should really keep its peace
I throw stones at my feet
’cause they stray and lead to defeat
A couple of big ones at my heart
’cause the thing is freezing cold
But my nafs is still alive
and kicking unstoppable and on a roll
I throw bricks at the devil so I’ll be sure to hit him
But first at the man in the mirror
so I can chase out the venom

Isam:
Hmm, a little boy shot in the head
Just another kid sent out to get some bread
Not the first murder nor the last
Again and again a repetition of the past
Since the very first day same story
Young ones, old ones, some glory
How can it be, has the whole world turned blind?
Or is it just ’cause it’s only affecting my kind?!
If these walls could speak,
imagine what would they say
For me in this path that I walk on
there’s only one way
Bullets may kill, bones may break
Still I throw stones like David before me and I say