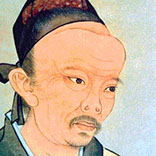 Qu Yuan (343–278 BC) was a Chinese poet and minister who lived during the Warring States period of ancient China.

He is known for his contributions to classical poetry and verses, especially through the poems of the Chu Ci anthology (also known as The Songs of the South or Songs of Chu): a volume of poems attributed to or considered to be inspired by his verse writing. Together with the Shi Jing, the Chu Ci is one of the two great collections of ancient Chinese verse. He is also remembered as the supposed origin of the Dragon Boat Festival.

Historical details about Qu Yuan’s life are few, and his authorship of many Chu Ci poems have been questioned at length. However, he is widely accepted to have written Li Sao, the most well-known of the Chu Ci poems. The first known reference to Qu Yuan appears in a poem written in 174 BC by Jia Yi, an official from Luoyang who was slandered by jealous officials and banished to Changsha by Emperor Wen of Han. While traveling, he wrote a poem describing the similar fate of a previous “Qu Yuan.” Eighty years later, the first known biography of Qu Yuan’s life appeared in Han Dynasty historian Sima Qian’s Records of the Grand Historian, though it contains a number of contradictory details.

Qu Yuan is regarded as the first author of verse in China to have his name associated to his work, since prior to that time, poetic works were not attributed to any specific authors. He is considered to have initiated the so-called sao style of verse, which is named after his work Li Sao, in which he abandoned the classic four-character verses used in poems of Shi Jing and adopted verses with varying lengths. This resulted in poems with more rhythm and latitude in expression. Qu Yuan is also regarded as one of the most prominent figures of Romanticism in Chinese classical literature, and his masterpieces influenced some of the greatest Romanticist poets in Tang Dynasty such as Li Bai. During the Han Dynasty, Qu Yuan became established as a heroic example of how a scholar and official who was denied public recognition suitable to their worth should behave. 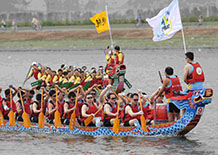 Dragon Boat Festival : Popular legend has it that villagers carried their dumplings and boats to the middle of the river and desperately tried to save Qu Yuan after he immersed himself in the Miluo but were too late to do so. However, in order to keep fish and evil spirits away from his body, they beat drums and splashed the water with their paddles, and they also threw rice into the water both as a food offering to Qu Yuan’s spirit and also to distract the fish away from his body. However, the legend continues, that late one night, the spirit of Qu Yuan appeared before his friends and told them that he died because he had taken himself under the river. Then, he asked his friends to wrap their rice into three-cornered silk packages to ward off the dragon.

These packages became a traditional food known as zongzi, although the lumps of rice are now wrapped in leaves instead of silk. The act of racing to search for his body in boats gradually became the cultural tradition of dragon boat racing, held on the anniversary of his death every year. Today, people still eat zongzi and participate in dragon boat races to commemorate Qu Yuan’s sacrifice on the fifth day of the fifth month of the traditional lunisolar Chinese calendar. The countries around China, such as Vietnam and Korea, also celebrate variations of this Dragon Boat Festival as part of their shared cultural heritage.

There seem to be a man in the deep mountain,
Clad in creeping vine and girded with ivy,
With a charming look and a becoming smile.
‘Do you admire me for my lovely form?’
She rides a red leopard – striped lynxes following behind –
Her chariot of magnolia arrayed with banners of cassia,
Her cloak made of orchids and her girdle of azalea,
Calling sweet flowers for those dear in her heart.

‘I live in a bamboo grove, the sky unseen
The road hither is steep and dangerous; I arrive alone and late.
Alone I stand on the mountain top
While the clouds gather beneath me.

‘All gloomy and dark is the day;
The east wind drifts and god sends down rain.
Waiting for the divine one, I forget to go home.
The year is late. Who will now bedeck me?

‘I pluck the larkspur on the mountain side,
The rocks are craggy; and the vines tangled.
Complaining of the young lord, sadly I forget to go home.
You, my lord, are thinking of me; but you have no time,’

The man in the mountain, fragrant with sweet herb,
Drinks from the rocky spring, shaded by pines and firs.
‘You, my lord, are thinking of me, but then you hesitate.’

The thunder rumbles and the rain darkens;
The gibbons mourn, howling all the night;
The wind whistles and the trees are bare.
‘I am thing of the young lord; I sorrow in vain.’