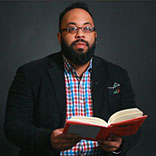 Kevin Young (born November 8, 1970) is an American poet and teacher of poetry.

Young graduated from Harvard College in 1992, held a Stegner Fellowship at Stanford University (1992–1994), and received his Master of Fine Arts from Brown University. While in Boston and Providence, he was part of the African-American poetry group, The Dark Room Collective. He is heavily influenced by the poets Langston Hughes, John Berryman, and Emily Dickinson and by the artist Jean-Michel Basquiat.

I am no longer ashamed
how for weeks, after, I wanted
to be dead – not to die,

mind you, or do
myself in – but to be there
already, walking amongst

all those I’d lost, to join
the throng singing,
if that’s what there is –

like the quilt my grandmother
must have made, one side
a patchwork of color –

blues, green like the underside
of a leaf – the other
an old pattern of the dolls

of the world, never cut out
but sewn whole – if the world
were Scotsmen & sailors

in traditional uniforms.
Mourning, I’ve learned, is just
a moment, many,

grief the long betrothal
beyond. Grief what
we wed, ringing us –

at the foot of my marriage bed,
its weight months of needling
& thread. Each straightish,

pale, uneven stitch
like the white hairs I earned
all that hollowed year – pull one

& ten more will come,
wearing white, to its funeral –
each a mourner, a winter,

gathering ash at my temple.