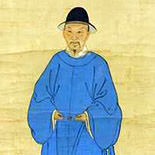 Tang Yin (1470–1524), courtesy name Tang Bohu, was a Chinese scholar, painter, calligrapher, and poet of the Ming Dynasty period whose life story has become a part of popular lore. Even though he was born during Ming Dynasty, many of his paintings (especially paintings of people) were illustrated with elements from Pre-Tang to Song Dynasty (12th century).

Tang’s eccentric lifestyle has prompted storytellers to immortalize him as a trickster character in Chinese folklore. In one such story, he falls in love with a slave girl whom he glimpses on the boat of a high official passing through Suzhou. He has himself sold as a slave to the official’s household so that he may approach her. With the help of his friends, he eventually succeeds in bringing her home. This story prompted the playwright Three Words by Feng Menglong and the opera The Three Smiles.

INSCRIPTION FOR A PORTRAIT
T’ang Yin

Last night the cherry-apple
deflowered by the first rain-drops
Its fallen petals slight and frail
their beauty almost articulate.
My mistress rising early
leaves her bedroom

In her hand a mirror
to admire her painted cheeks.
She asks me ‘Which is prettier
the petals or my complexion?
To her question I reply
‘They win by innocence.’

At hearing this my mistress
displays a charming anger
Refusing to believe dead petals
surpass a real live person.
She crumbles a handful of blossom
to throw in my face —

‘Tonight, my dear’ she says
‘sleep with the flowers!’