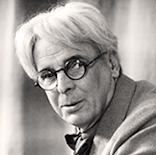 In 1923 he was awarded the Nobel Prize in Literature as the first Irishman so honored for what the Nobel Committee described as “inspired poetry, which in a highly artistic form gives expression to the spirit of a whole nation.” Yeats is generally considered one of the few writers who completed their greatest works after being awarded the Nobel Prize; such works include The Tower (1928) and The Winding Stair and Other Poems (1929).

I know that I shall meet my fate
Somewhere among the clouds above;
Those that I fight I do not hate
Those that I guard I do not love;
My country is Kiltartan Cross,
My countrymen Kiltartan’s poor,
No likely end could bring them loss
Or leave them happier than before.
Nor law, nor duty bade me fight,
Nor public man, nor cheering crowds,
A lonely impulse of delight
Drove to this tumult in the clouds;
I balanced all, brought all to mind,
The years to come seemed waste of breath,
A waste of breath the years behind
In balance with this life, this death.

HE WISHES FOR THE CLOTHS OF HEAVEN
William Butler Yeats

Had I the heavens’ embroidered cloths,
Enwrought with golden and silver light,
The blue and the dim and the dark cloths
Of night and light and the half-light,
I would spread the cloths under your feet:
But I, being poor, have only my dreams;
I have spread my dreams under your feet;
Tread softly because you tread on my dreams.

A sudden blow: the great wings beating still
Above the staggering girl, her thighs caressed
By the dark webs, her nape caught in his bill,
He holds her helpless breast upon his breast.

How can those terrified vague fingers push
The feathered glory from her loosening thighs?
And how can body, laid in that white rush,
But feel the strange heart beating where it lies?

A shudder in the lions engenders there
The broken wall, the burning roof and tower
And Agamemnon dead.
Being so caught up,
So mastered by the brute blood of the air,
Did she put on his knowledge with his power
Before the indifferent beak let her drop?

Because I am mad about women
I am mad about the hills,’
Said that wild old wicked man
Who travels where God wills.
“Not to die on the straw at home.
Those hands to close these eyes,
That is all I ask, my dear,
From the old man in the skies.
Daybreak and a candle-end.

“Kind are all your words, my dear,
Do not the rest withhold.
Who can know the year, my dear,
when an old man’s blood grows cold? ‘
I have what no young man can have
Because he loves too much.
Words I have that can pierce the heart,
But what can he do but touch?’
Daybreak and a candle-end.

Then Said she to that wild old man,
His stout stick under his hand,
“Love to give or to withhold
Is not at my command.
I gave it all to an older man:
That old man in the skies.
Hands that are busy with His beads
Can never close those eyes.’
Daybreak and a candle-end.

“Go your ways, O go your ways,
I choose another mark,
Girls down on the seashore
Who understand the dark;
Bawdy talk for the fishermen;
A dance for the fisher-lads;
When dark hangs upon the water
They turn down their beds.
Daybreak and a candle-end.

“A young man in the dark am I,
But a wild old man in the light,
That can make a cat laugh, or
Can touch by mother wit
Things hid in their marrow-bones
From time long passed away,
Hid from all those warty lads
That by their bodies lay.
Daybreak and a candle-end.

“All men live in suffering,
I know as few can know,
Whether they take the upper road
Or stay content on the low,
Rower bent in his row-boat
Or weaver bent at his loom,
Horseman erect upon horseback
Or child hid in the womb.
Daybreak and a candle-end.

“That some stream of lightning
From the old man in the skies
Can burn out that suffering
No right-taught man denies.
But a coarse old man am I,
I choose the second-best,
I forget it all awhile
Upon a woman’s breast.’
Daybreak and a candle-end.