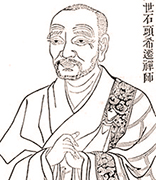 All existing branches of Zen throughout the world are said to descend either from Shitou Xiqian or from his contemporary Mazu Daoyi. Shítóu is credited with the authorship of two well-known Zen Buddhist poems. The Sandokai lays out a comprehensive view of the nature of truth. The Song of the Grass Hut is a paean to a life of secluded meditation.

The mind of the great sage of India
is intimately communicated from west to east.

While human faculties are sharp or dull,
The Way has no northern or southern ancestors.

The spiritual source shines clear in the light;
the branching streams flow on in the dark.

Grasping at things is surely delusion;
according with sameness is still not enlightenment.

All the objects of the senses
interact and yet do not.

Sights vary in quality and form,
sounds differ as pleasing or harsh.

Refined and common speech come together in the dark,
clear and murky phrases are distinguished in the light.

The four elements return to their natures
just as a child turns to its mother.

Eye and sights, ear and sounds,
nose and smells, tongue and tastes;

Thus with each and every thing,
depending on these roots, the leaves spread forth.

Trunk and branches share the essence;
revered and common, each has its speech.

In the light there is darkness,
but don’t take it as darkness;

In the dark there is light,
but don’t see it as light.

Light and darkness oppose one another
like front and back foot in walking.

Each of the myriad things has its merit,
expressed according to function and place.

Hearing the words, understand the meaning;
don’t set up standards of your own.

If you don’t understand the Way right before you,
how will you know the path as you walk?

Progress is not a matter of far or near,
but if you are confused, mountains and rivers block your way.

I respectfully urge you who study the mystery,
do not pass your days and nights in vain.

I’ve built a grass hut where there’s nothing of value.
After eating, I relax and enjoy a nap.
When it was completed, fresh weeds appeared.
Now it’s been lived in – covered by weeds.

Though the hut is small, it includes the entire world.
In ten square feet, an old man illumines forms and their nature.
A Great Vehicle bodhisattva trusts without doubt.
The middling or lowly can’t help wondering;
Will this hut perish or not?

Perishable or not, the original master is present,
not dwelling south or north, east or west.
Firmly based on steadiness, it can’t be surpassed.
A shining window below the green pines —
Jade palaces or vermilion towers can’t compare with it.

Just sitting with head covered, all things are at rest.
Thus, this mountain monk doesn’t understand at all.
Living here he no longer works to get free.
Who would proudly arrange seats, trying to entice guests?

Turn around the light to shine within, then just return.
The vast inconceivable source can’t be faced or turned away from.
Meet the ancestral teachers, be familiar with their instruction,
Bind grasses to build a hut, and don’t give up.

Let go of hundreds of years and relax completely.
Open your hands and walk, innocent.
Thousands of words, myriad interpretations,
Are only to free you from obstructions.
If you want to know the undying person in the hut,
Don’t separate from this skin bag here and now.