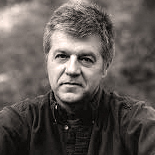 Robert Wrigley was born February 27, 1951. He was drafted in 1971, but was discharged as a conscientious objector. The first in his family to graduate from college, and the first male for generations to escape work in a coal mine, Wrigley earned his MFA from the University of Montana, where he studied with Madeline DeFrees, John Haines, and Richard Hugo.

Wrigley believes that poetry can influence the world and people’s lives rather than just reside within the confines of academia. He holds that “poetry can have a redemptive function. It can look at the chaos you see and make a kind of sense of the smallest part of it.” His poems are concerned with rural Western landscapes and humankind’s place within the natural world, and he aims to “tell all the truth, but make it sing.”

ANTI-MOON
Robert Wrigley
1
For Moon so loved
the Sun, her very silver taunted
Earth with the everything
she would give and do.
These were the nights

Moon’s darkness promised more
and more. Still,
day was somewhere too,
Moon knew, as she knew
in her blindness how

his light would be undone again
by the other’s motherly jade,
how he’d lick her
oceanic salts and linger
at the unmetaphorical furrows.

2
Thus may be explained
certain lunar aspirations
among the beautiful. Moon
steps into the night sky
like the kept, spectacular aunt

from a black limousine,
bearing gifts for us, the hungry,
bedazzled children. Earth,
our mother, salts the holiday meal
with sweat and tear,

as Father burns in his chair
for the sister he might have had.
Outside a few flakes of snow begin to fall.
What light there is in moonlight,
draped across the world like silk.

Wearing only moonglowand the fire’s final shawls of smoke,
she made her way from the tent
at 2 a.m., then squatted to pee.

and the heavenly light showed me everything:
its cool tongues of silver lapping mountain
stones and the never-motionless leaves
of aspens, licking her back, her lips,

haunches, and more, illuminating even the deep
green eyes of whatever animal it was
that watched from the forest then—
a deer, I believed, and still believe,

though I confess I did not rise that night
to make sure, did not shine my light or murmur
but waited, letting my head
as she returned settle slowly back

down to the pillow made of my clothes
and welcomed her shivering
back into the tent, from which
I had sworn not to look.