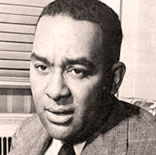 Richard Wright (September 4, 1908 – November 28, 1960), one of the early forceful and eloquent spokesmen for black Americans, author of “Native Son,” and “Black Boy”, was also, a major poet. Some believe his work helped change race relations in the United States in the mid-20th century.

During the last eighteen months of his life, he discovered and became enamored of haiku, the strict seventeen-syllable Japanese form. Wright became so excited about the discovery that he began writing his own haiku, in which he attempted to capture, through his sensibility as an African American, the same Zen discipline and beauty in depicting man’s relationship, not to his fellow man as he had in his fiction, but to nature and the natural world.

In all, he wrote over 4,000 haiku, from which he chose, before he died, the 817 he preferred. Rather than a deviation from his self-appointed role as spokesman for black Americans of his time, Richard Wright’s haiku, disciplined and steeped in beauty, are a culmination: not only do they give added scope to his work but they bring to it a universality that transcends both race and color without ever denying them.

Wright wrote his haiku obsessively–in bed, in cafes, in restaurants, in both Paris and the French countryside. His daughter Julia believes, quite rightly, that her father’s haiku were “self-developed antidotes against illness, and that breaking down words into syllables matched the shortness of his breath.” They also offered the novelist and essayist a new form of expression and a new vision: with the threat of death constantly before him, he found inspiration, beauty, and insights in and through the haiku form. The discovery and writing of haiku also helped him come to terms with nature and the earth, which in his early years he had viewed as hostile and equated with suffering and physical hunger. Fighting illness and frequently bedridden, deeply upset by the recent loss of his mother, Ella, Wright continued, as his daughter notes, “to spin these poems of light out of the gathering darkness.”

BETWEEN THE WORLD AND ME
Richard Wright

And one morning while in the woods I stumbled
suddenly upon the thing,
Stumbled upon it in a grassy clearing guarded by scaly
oaks and elms
And the sooty details of the scene rose, thrusting
themselves between the world and me….

There was a design of white bones slumbering forgottenly
upon a cushion of ashes.
There was a charred stump of a sapling pointing a blunt
finger accusingly at the sky.
There were torn tree limbs, tiny veins of burnt leaves, and
a scorched coil of greasy hemp;
A vacant shoe, an empty tie, a ripped shirt, a lonely hat,
and a pair of trousers stiff with black blood.
And upon the trampled grass were buttons, dead matches,
butt-ends of cigars and cigarettes, peanut shells, a
drained gin-flask, and a whore’s lipstick;
Scattered traces of tar, restless arrays of feathers, and the
lingering smell of gasoline.
And through the morning air the sun poured yellow
surprise into the eye sockets of the stony skull….

And while I stood my mind was frozen within cold pity
for the life that was gone.
The ground gripped my feet and my heart was circled by
icy walls of fear–
The sun died in the sky; a night wind muttered in the
grass and fumbled the leaves in the trees; the woods
poured forth the hungry yelping of hounds; the
darkness screamed with thirsty voices; and the witnesses rose and lived:
The dry bones stirred, rattled, lifted, melting themselves
into my bones.
The grey ashes formed flesh firm and black, entering into
my flesh.

The gin-flask passed from mouth to mouth, cigars and
cigarettes glowed, the whore smeared lipstick red
upon her lips,
And a thousand faces swirled around me, clamoring that
my life be burned….

And then they had me, stripped me, battering my teeth
into my throat till I swallowed my own blood.
My voice was drowned in the roar of their voices, and my
black wet body slipped and rolled in their hands as
they bound me to the sapling.
And my skin clung to the bubbling hot tar, falling from
me in limp patches.
And the down and quills of the white feathers sank into
my raw flesh, and I moaned in my agony.
Then my blood was cooled mercifully, cooled by a
baptism of gasoline.
And in a blaze of red I leaped to the sky as pain rose like water, boiling my limbs
Panting, begging I clutched childlike, clutched to the hot
sides of death.
Now I am dry bones and my face a stony skull staring in
yellow surprise at the sun….

I am black and I have seen black hands
Raised in fists of revolt, side by side with the white fists
Of white workers,
And some day — and it is only this which sustains me–
Some day there shall be millions and millions of them,
On some red day in a burst of fists on a new horizon!