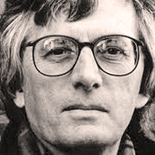 Charles Wright (born August 25, 1935) is an American poet. He shared the National Book Award in 1983 for Country Music: Selected Early Poems and won the Pulitzer Prize in 1998 for Black Zodiac.

A SHORT HISTORY OF THE SHADOW
Charles Wright

Thanksgiving, dark of the moon.
Nothing down here in the underworld but vague shapes and black holes,
Heaven resplendent but virtual
Above me,
trees stripped and triple-wired like Irish harps.
Lights on Pantops and Free Bridge mirror the eastern sky.
Under the bridge is the river,
the red Rivanna.
Under the river’s redemption, it says in the book,
It says in the book,
Through water and fire the whole place becomes purified,
The visible by the visible, the hidden by what is hidden.
________

Each word, as someone once wrote, contains the universe.
The visible carries all the invisible on its back.
Tonight, in the unconditional, what moves in the long-limbed grasses,
what touches me
As though I didn’t exist?
What is it that keeps on moving,
a tiny pillar of smoke
Erect on its hind legs,
loose in the hollow grasses?
A word I don’t know yet, a little word, containing infinity,
Noiseless and unrepentant, in sift through the dry grass.
Under the tongue is the utterance.
Under the utterance is the fire, and then the only end of fire.
________
Only Dante, in Purgatory, casts a shadow,
L’ombra della carne, the shadow of flesh—
everyone else is one.
The darkness that flows from the world’s body, gloomy spot,
Pre-dogs our footsteps, and follows us,
diaphanous bodies
Watching the nouns circle, and watching the verbs circle,
Till one of them enters the left ear and becomes a shadow
Itself, sweet word in the unwaxed ear.
This is a short history of the shadow, one part of us that’s real.
This is the way the world looks
In late November,
no leaves on the trees, no ledge to foil the lightfall.
________
No ledge in early December either, and no ice,
La Niña unhosing the heat pump
up from the Gulf,
Orange Crush sunset over the Blue Ridge,
No shadow from anything as evening gathers its objects
And eases into earshot.
Under the influx the outtake,
Leon Battista Alberti says,
Some lights are from stars, some from the sun
And moon, and other lights are from fires.
The light from the stars makes the shadow equal to the body.
Light from fire makes it greater,
there, under the tongue, there, under the utterance.