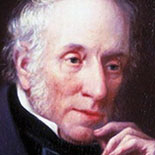 Wordsworth, with Samuel Taylor Coleridge, helped to launch the Romantic Age in English literature with their joint publication Lyrical Ballads (1798).

Wordsworth’s magnum opus is generally considered to be The Prelude, a semi autobiographical poem of his early years that he revised and expanded a number of times. It was posthumously titled and published, before which it was generally known as “the poem to Coleridge”. Wordsworth was Britain’s Poet Laureate from 1843 until his death in 1850.

I WANDERED LONELY AS A CLOUDWilliam Wordsworth

I wandered lonely as a Cloud
That floats on high o’er Vales and Hills,
When all at once I saw a crowd
A host of dancing Daffodils;
Along the Lake, beneath the trees,
Ten thousand dancing in the breeze.

The waves beside them danced, but they
Outdid the sparkling waves in glee: –
A poet could not but be gay
In such a laughing company:
I gaz’d – and gaz’d – but little thought
What wealth the shew to me had brought:

For oft when on my couch I lie
In vacant or in pensive mood,
They flash upon that inward eye
Which is the bliss of solitude,
And then my heart with pleasure fills,
And dances with the Daffodils.

Stern Daughter of the voice of God!O Duty! if that name thou love
Who art a light to guide, a rod
To check the erring, and reprove;
Thou, who art victory and law
When empty terrors overawe;
From vain temptations dost set free;
And clam’st the weary strife of frail humanity!

There are who ask not if thine eye
Be on them; who, in love and truth,
Where no misgiving is, rely
Upon the genial sense of youth:
Glad Hearts! without reproach or blot;
Who do thy work, and know it not:
Oh! if through confidence misplaced
They fail, thy saving arms, dread Power! around them cast.

Serene will be our days and bright,
And happy will our nature be,
When love is an unerring light,
And joy its own security.
And they a blissful course may hold
Even now, who, not unwisely bold,
Live in the spirit of this creed;
Yet seek thy firm support, according to their need.

I, loving freedom, and untried:
No sport of every random gust,
Yet being to myself a guide,
Too blindly have reposed my trust:
And oft, when in my heart was heard
Thy timely mandate, I deferred
The task, in smoother walks to stray;
But thee I now would serve more strictly, if I may.

Through no disturbance of my soul,
Or strong compunction in me wrought,
I supplicate for thy control;
But in the quietness of thought:
Me this unchartered freedom tires;
I feel the weight of chance desires:
My hopes no more must change their name,
I long for a repose that ever is the same.

Stern Lawgiver! yet thou dost wear
The Godhead’s most benignant grace;
Nor know we anything so fair
As is the smile upon thy face:
Flowers laugh before thee on their beds
And fragrance in thy footing treads
Thou dost preserve the stars from wrong;
And the most ancient heavens, through Thee, are fresh and strong.

To humbler functions, awful Power!
I call thee: I myself command
Unto thy guidance from this hour;
Oh! let my weakness have an end!
Give unto me, made lowly wise,
The spirit of self-sacrifice;
The confidence of reason give;
And, in the light of truth, thy Bondman let me live!

THE WORLD IS TOO MUCH WITH US; LATE AND SOON
William Wordsworth

The world is too much with us; late and soon,
Getting and spending, we lay waste our powers:
Little we see in Nature that is ours;
We have given our hearts away, a sordid boon!
This Sea that bares her bosom to the moon;
The winds that will be howling at all hours,
And are up-gathered now like sleeping flowers;
For this, for everything, we are out of tune,
It moves us not.–Great God! I’d rather be
A Pagan suckled in a creed outworn;
So might I, standing on this pleasant lea,
Have glimpses that would make me less forlorn;
Have sight of Proteus rising from the sea;
Or hear old Triton blow his wreathed horn.