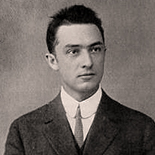 Williams was also a pediatrician with a medical degree from the University of Pennsylvania School of Medicine. Williams “worked harder at being a writer than he did at being a physician” but excelled at both.

William Carlos Williams was born in Rutherford, New Jersey. He began writing poetry while a student at Horace Mann High School, at which time he made the decision to become both a writer and a doctor. He received his M.D. from the University of Pennsylvania, where he met and befriended Ezra Pound. Pound became a great influence in Williams’ writing, and in 1913 arranged for the London publication of Williams’s second collection, The Tempers. Returning to Rutherford, where he sustained his medical practice throughout his life, Williams began publishing in small magazines and embarked on a prolific career as a poet, novelist, essayist, and playwright. Following Pound, he was one of the principal poets of the Imagist movement, though as time went on, he began to increasingly disagree with the values put forth in the work of Pound and especially Eliot, who he felt were too attached to European culture and traditions.

Continuing to experiment with new techniques of meter and lineation, Williams sought to invent an entirely fresh—and singularly American—poetic, whose subject matter was centered on the everyday circumstances of life and the lives of common people. His influence as a poet spread slowly during the twenties and thirties, overshadowed, he felt, by the popularity of Eliot’s “The Waste Land”. Williams’s health began to decline after a heart attack in 1948 and a series of strokes, but he continued writing up until his death.

A LOVE SONG
William Carlos WilliamsWhat have I to say to you
When we shall meet?
Yet—
I lie here thinking of you.

The stain of love
Is upon the world.
Yellow, yellow, yellow,
It eats into the leaves,
Smears with saffron
The horned branches that lean
Heavily
Against a smooth purple sky.

There is no light—
Only a honey-thick stain
That drips from leaf to leaf
And limb to limb
Spoiling the colors
Of the whole world.

I am alone.
The weight of love
Has buoyed me up
Till my head
Knocks against the sky.

See me!
My hair is dripping with nectar—
Starlings carry it
On their black wings.
See, at last
My arms and my hands
Are lying idle.

How can I tell
If I shall ever love you again
As I do now?

Flowers through the windowlavender and yellow

changed by white curtains—Smell of cleanliness—

a glass pitcher, the tumblerturned down, by which