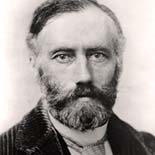 William Quan Judge (April 13, 1851 – March 21, 1896) was an Irish-American mystic, esotericist, and occultist, and one of the founders of the original Theosophical Society. He was born in Dublin, Ireland. When he was 13 years old, his family emigrated to the United States. He became a naturalized citizen of the USA at age 21 and passed the New York state bar exam, specializing in commercial law.

A vigorous, imaginative, and idealistic young man, he was among the seventeen people who first put the Theosophical Society together. Like Helena Petrovna Blavatsky and Henry Steel Olcott, he stayed in the organization when others left. When Olcott and Blavatsky left the United States for India, Judge stayed behind to manage the Society’s work, all the while working as a lawyer.