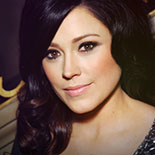 Since her first album in 2009, she has received one Grammy Award nomination and three Dove Award nominations, two of which she won. Jobe is also a worship pastor at Gateway Church, a charismatic megachurch in Southlake, Texas.