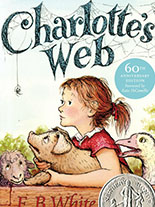 Charlotte’s Web is a children’s novel by American author E. B. White and illustrated by Garth Williams; it was published in October 15, 1952, by Harper & Brothers.

The novel tells the story of a pig named Wilbur and his friendship with a barn spider named Charlotte. When Wilbur is in danger of being slaughtered by the farmer, Charlotte writes messages praising Wilbur (such as “Some Pig”) in her web in order to persuade the farmer to let him live.

Written in White’s dry, low-key manner, Charlotte’s Web is considered a classic of children’s literature, enjoyable to adults as well as children. The description of the experience of swinging on a rope swing at the farm is an often cited example of rhythm in writing, as the pace of the sentences reflects the motion of the swing. In 2000, Publishers Weekly listed the book as the best-selling children’s paperback of all time.

Charlotte’s Web was adapted into an animated feature by Hanna-Barbera Productions and Sagittarius Productions in 1973. Paramount released a direct-to-video sequel, Charlotte’s Web 2: Wilbur’s Great Adventure, in the U.S. in 2003 (Universal released the film internationally). A live-action film version of E. B. White’s original story was released in 2006. A video game based on this adaption was also released in 2006.