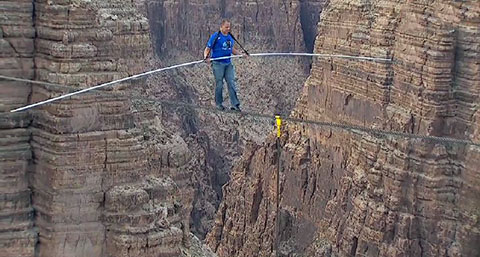 Nikolas “Nik” Wallenda (born January 24, 1979) is an American acrobat, aerialist, daredevil, high wire artist, and author. He is known for his high-wire performances without a safety net. He holds nine Guinness World Records for various acrobatic feats, but is best known as the first person to walk a tightrope stretched directly over Niagara Falls.

A seventh-generation member of The Flying Wallendas family, Nik Wallenda participated in various circus acts as a child. At age 13, he made his professional tightrope walking debut. He chose high-wire walking as his career in 1998, after joining family members in a seven-person pyramid on the wire. In 2001, Wallenda was part of the world’s first seven-person high-wire pyramid. From 2002 to 2005, he performed with his family at various venues, forming his own troupe in 2005. During 2007 and 2008, he performed with Bello Nock in a double version of the Wheel of Steel that he helped invent. In 2009, he set new personal bests for highest and longest tightrope walks, completing a total of 15 walks above 100 feet (30 m) in the air that year.

In 2008, Wallenda set Guinness World Records for longest and highest bicycle ride on a high-wire 250-foot-long (76 m) ride at 135 feet (41 m) above the ground in New Jersey. He nearly doubled the height record in 2010 to 260 feet (79 m). On the same day in 2010, he upped his personal best by tightrope walking over 2,000 feet (610 m) in a single performance. In 2011, Wallenda set a world record by performing on the Wheel of Death atop the 23 story Tropicana Casino and Resort. Later that year, Wallenda and his mother tightrope walked between the two towers of Condado Plaza Hotel in Puerto Rico. The feat was a re-creation of the one that had killed Karl Wallenda, Nik’s great-grandfather and primary source of inspiration. On June 10, 2011, Wallenda hung from a helicopter 250 feet (76 m) off the ground using only his teeth to hold on.

After a two-year legal battle involving both sides of the Canada–United States border to gain approval, Wallenda crossed Niagara Falls on June 15, 2012 on a live ABC special. For the walk he was required to wear a safety harness for the first time in his life. Shortly thereafter, a reality show following Wallenda’s feats aired on the Science Channel. In 2013, Wallenda released a memoir entitled Balance. On June 23, 2013, he became the first person to high-wire walk across a Grand Canyon area gorge (crossing the Little Colorado River outside Grand Canyon National Park), the feat airing live on Discovery. He followed that up with Skyscraper Live, a live Discovery special which aired on November 2, 2014. In the special, Wallenda completed two tightrope walks, setting two new Guinness World Records: one for walking the steepest tightrope incline between two buildings, and the other for the highest tightrope walk while blindfolded. Wallenda is married with three children, and considers his Christian faith to be a central aspect of his life.