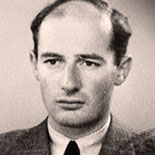 Wallenberg is widely celebrated for his successful efforts to rescue between tens of thousands and one hundred thousand Jews in Nazi-occupied Hungary during the Holocaust from Hungarian Fascists and the Nazis during the later stages of World War II. While serving as Sweden’s special envoy in Budapest between July and December 1944, Wallenberg issued protective passports and sheltered Jews in buildings designated as Swedish territory saving tens of thousands of lives.

On January 17, 1945, during the Siege of Budapest by the Red Army, Wallenberg was detained by Soviet authorities on suspicion of espionage and subsequently disappeared. He was later reported to have died on July 17, 1947 while imprisoned by communist authorities and KGB secret police in the Lubyanka, a building located in Moscow, Russia, housing both the KGB headquarters and its affiliated prison. The motives behind Wallenberg’s arrest and imprisonment by the Soviet government, along with questions surrounding the circumstances of his death and his possible ties to US intelligence, remain mysterious and are the subject of continued speculation.

Due to his courageous actions on behalf of the Hungarian Jews, Raoul Wallenberg has been the subject of numerous humanitarian honors in the decades following his presumed death. In 1981, U.S. Congressman Tom Lantos, himself one of those saved by Wallenberg, sponsored a bill making Wallenberg an Honorary Citizen of the United States. He is also an honorary citizen of Canada, Hungary, Australia and Israel. Israel has also designated Wallenberg one of the Righteous among the Nations. Monuments have been dedicated to him, and streets have been named after him throughout the world. A Raoul Wallenberg Committee of the United States was created in 1981 to “perpetuate the humanitarian ideals and the nonviolent courage of Raoul Wallenberg”. It gives the Raoul Wallenberg Award annually to recognize persons who carry out those goals. A postage stamp was issued by the U.S. in his honour in 1997. On 26 July 2012, he was awarded a Congressional Gold Medal by the United States Congress “in recognition of his achievements and heroic actions during the Holocaust.”