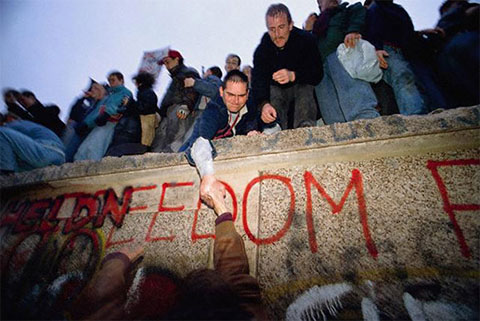 The Berlin Wall was a barrier that existed between 1961 and 1989 inclusively, constructed by the German Democratic Republic (GDR, East Germany) starting on August 13, 1961, that completely cut off (by land) West Berlin from surrounding East Germany and from East Berlin until it was opened in 1989. The barrier included guard towers placed along large concrete walls, which circumscribed a wide area (later known as the “death strip”) that contained anti-vehicle trenches, “fakir beds” and other defenses. In practice, the Wall served to prevent the massive emigration and defection that marked East Germany and the communist Eastern Bloc during the post-World War II period.

Before the Wall’s erection, 3.5 million East Germans circumvented Eastern Bloc emigration restrictions and defected from the GDR, many by crossing over the border from East Berlin into West Berlin, from where they could then travel to West Germany and other Western European countries. Between 1961 and 1989, the wall prevented almost all such emigration. During this period, around 5,000 people attempted to escape over the wall, with an estimated death toll of over 100 in and around Berlin, although that claim is disputed.

In 1989, a series of radical political changes occurred in the Eastern Bloc, associated with the liberalization of the Eastern Bloc’s authoritarian systems and the erosion of political power in the pro-Soviet governments in nearby Poland and Hungary. After several weeks of civil unrest, the East German government announced on November 9, 1989 that all GDR citizens could visit West Germany and West Berlin. Crowds of East Germans crossed and climbed onto the wall, joined by West Germans on the other side in a celebratory atmosphere. Over the next few weeks, euphoric public and souvenir hunters chipped away parts of the wall; the governments later used industrial equipment to remove most of what was left. Contrary to popular belief the wall’s actual demolition did not begin until Summer 1990 and was not completed until 1992. The fall of the Berlin Wall paved the way for German reunification, which was formally concluded on October 3, 1990.