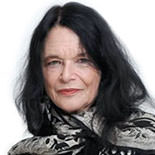 Since the 1960s, Waldman has been an active member of the Outrider experimental poetry community as a writer, performer, collaborator, professor, editor, scholar, and cultural/political activist. She has also been connected to the Beat poets.