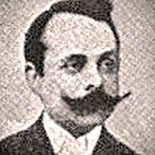 Vittorio Monti (January 6, 1868 – June 20, 1922) was an Italian composer, violinist, mandolinist and conductor. His most famous work is his Csárdás, written around 1904 and played by almost every gypsy orchestra.

Monti was born in Naples, where he studied violin and composition at the Conservatorio di San Pietro a Majella. Around 1900 he received an assignment as the conductor for the Lamoureux Orchestra in Paris, where he wrote several ballets and operettas, for example, Noël de Pierrot. He also wrote a method for mandolin Petite Méthode pour Mandoline, 98049, in which he included some of his own works, Perle Brillante, Dans Una Gondola, and Au Petit Jour. There were also works by F. Paolo Tosti.