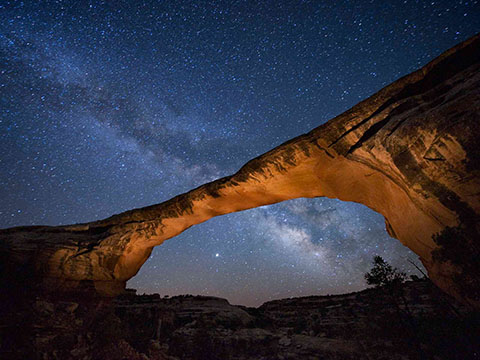 Natural Bridges National Monument is a U.S. National Monument located about 50 miles (80 km) northwest of the Four Corners boundary of southeast Utah, in the western United States, at the junction of White Canyon and Armstrong Canyon, part of the Colorado River drainage. It features the second largest natural bridge in the world, carved from the white Permian sandstone of the Cedar Mesa Formation that gives White Canyon its name.

The three bridges in the park are named Kachina, Owachomo, and Sipapu (the largest), which are all Hopi names. A natural bridge is formed through erosion by water flowing in the stream bed of the canyon. During periods of flash floods, particularly, the stream undercuts the walls of rock that separate the meanders (or “goosenecks”) of the stream, until the rock wall within the meander is undercut and the meander is cut off; the new stream bed then flows underneath the bridge. Eventually, as erosion and gravity enlarge the bridge’s opening, the bridge collapses under its own weight. There is evidence of at least two collapsed natural bridges within the Monument.

The Monument was nearly inaccessible for many decades (a three-day horseback ride from Blanding, Utah, the nearest settlement), as reflected by the visitor log kept by the Monument’s superintendents. The park received little visitation until after the uranium boom of the 1950s, which resulted in the creation of new roads in the area, including modern day Utah State Route 95, which was paved in 1976.