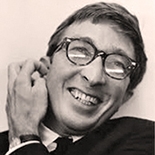 61 AND SOME
John Updike

How many more, I must ask myself,
such perfect ends of Augusts will I witness?—
the schoolgirls giggling in their months-old tans,

reviving school gossip as they hang on the curbs,
as brown as maple seeds, the strip of curbside grass
sun-parched in the ragged shade beneath the maple

that in its globular cloud of green cumulus
holds now an arc, a bulge of rouge,
held up to the bored blue sky like a cheek to kiss.

Strangest is their reality,
their three-dimensional workmanship:
veined pebbles that have an underside,
maps one could have studied for minutes longer,
books we seem to read page after page.

If these are symbols cheaply coined
to buy the mind a momentary pardon,
whence this extravagance? Fine
as dandelion polls, they surface and explode
in the wind of the speed of our dreaming,

so that we awake with the sense
of having missed everything, tourists
hustled by bus through a land whose history
is our rich history, whose artifacts
were filed to perfection by beggars we fear.

How beautiful to think
that each of these clean secretaries
at night, to please her lover, takes
a fountain into her mouth
and lets her insides, drenched with seed,
flower into her landscapes:
meadows sprinkled with baby’s breath,
hoarse twiggy woods, birds dipping, a multitude
of skies containing clouds, plowed earth stinking
of its upturned humus, and small farms each
with a silver silo.