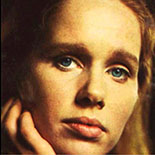 Liv is known as one of the “muses” of Swedish director Ingmar Bergman. Ullmann won a Golden Globe Award for Best Actress – Motion Picture Drama in 1972 for the film The Emigrants (1971), and has been nominated for another five. She has also been nominated for the Palme d’Or, and twice for the Academy Award, as well as two nominations for a BAFTA Film Award.