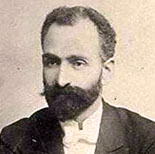 Hovhannes Tumanyan (February 19, 1869 – March 23, 1923) was an Armenian writer and public activist. He is considered to be the national poet of Armenia.

Tumanyan wrote poems, quatrains, ballads, novels, fables, critical and journalistic articles. His work was mostly written in realistic form, often centering on everyday life of his time. Born in the historical village of Dsegh in the Lori region, at a young age Tumanyan moved to Tiflis, which was the center of Armenian culture under the Russian Empire during the 19th and early 20th centuries. He soon became known to the wide Armenian society for his simple but very poetic works.

Many films and animated films have been adapted from Tumanyan’s works. Two operas: Anush (1912) by Armen Tigranian and Almast (1930) by Alexander Spendiaryan, were written based on his works.

The Crane has lost his way across the heaven,
From yonder stormy cloud I hear him cry,
A traveler a’er an unknown pathway driven,
In a cold world unheeded he doth fly.

Ah, whither leads this pathway long and dark,
My God, where ends it, thus with fears obsessed?
When shall night end this day’s last glimmering spark?
Where shall my weary feet to-night find rest?

Farewell, beloved bird, where’er thou roam
Spring shall return and bring thee back once more,
With thy sweet mate and young ones, to thy home
Thy last year’s nest upon the sycamore.

But I am exiled from my ruined nest,
And roam with faltering steps from hill to hill,
Like to the fowls of heaven in my unrest
Envying the boulders motionless and still.

Each boulder unassailed stands in its place,
But I from mine must wander tempest tossed
And every bird its homeward way can trace,
But I must roam in darkness, lone and lost.

Ah, whither leads this pathway long and dark,
My God, where ends it, thus with fears obsessed?
When shall night end this day’s last glimmering spark?
Where shall my weary feet to-night find rest?

For forty long years I follow one path,
Straight and fearless
Ascending
Towards a bright world, the Holy Unknown.
For forty long years by that dread path
I have traveled thus,
And now at last
Have reached
Tranquility.
I have left down there, at the mountain’s foot
Glory and wealth,
Grudge and envy,
Everything that oppressed the soul.
And all the things
That I view again
From my mountain heights
Look so worthless and meager.
Now, richer in wisdom, my burden light,
With carefree laughter,
Song and canticle
I descend from the mountain’s other side.