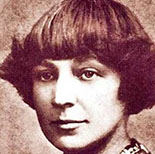 Marina Ivanovna Tsvetaeva (October 8, 1892 – August 31, 1941) was a Russian and Soviet poet. Her work is considered among some of the greatest in twentieth century Russian literature.

Marina lived through and wrote of the Russian Revolution of 1917 and the Moscow famine that followed it. In an attempt to save her daughter Irina from starvation, she placed her in a state orphanage in 1919, where she died of hunger.

Tsvetaeva left Russia in 1922 and lived with her family in increasing poverty in Paris, Berlin and Prague before returning to Moscow in 1939. Her husband Sergei Efron and her daughter Ariadna Efron (Alya) were arrested on espionage charges in 1941; and her husband was executed. Tsvetaeva committed suicide in 1941. As a lyrical poet, her passion and daring linguistic experimentation mark her as a striking chronicler of her times and the depths of the human condition.

TO KISS THE BROWMarina Tsvetaeva

WHY SUCH TENDERNESS?
Marina Tsvetaeva

Why such tenderness?
Not the first – these curls
I stroke, I’ve known, yes,
Lips much darker than yours.

As stars fade and rise,
– Why such tenderness?
Eyes have risen
And faded to my eyes.

Yet with no such song
Have I heard night darker
Crowned – O tenderness –
In the breast of the singer.

Why such tenderness,
And what to do with it, singer
So young, simply passing by?
And could eyelashes – be longer?