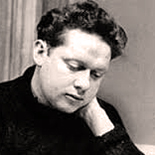 Dylan’s works include the poems “Do not go gentle into that good night” and “And death shall have no dominion”; the ‘play for voices’ Under Milk Wood; and stories and radio broadcasts such as A Child’s Christmas in Wales and Portrait of the Artist as a Young Dog. He became widely popular in his lifetime and remained so after his premature death at the age of 39 in New York City. By then, he had acquired a reputation, which he had encouraged, as a “roistering, drunken and doomed poet”.

Thomas was a neurotic, sickly child who shied away from school and preferred reading on his own. He read all of D. H. Lawrence’s poetry, impressed by vivid descriptions of the natural world. Fascinated by language, he excelled in English and reading but neglected other subjects. He dropped out of school at sixteen to become a junior reporter for the South Wales Daily Post.

In January 1950, at the age of thirty-five, Thomas visited America for the first time. His reading tours of the United States, which did much to popularize the poetry reading as a new medium for the art, are famous and notorious, for Thomas was the archetypal Romantic poet of the popular American imagination: he was flamboyantly theatrical, a heavy drinker, engaged in roaring disputes in public, and read his work aloud with tremendous depth of feeling and a singing Welsh lilt.

Thomas said of his poetry, “It is a record of my individual struggle from darkness toward some measure of light.”

DO NOT GO GENTLE INTO THAT GOOD NIGHT
Dylan Thomas

Do not go gentle into that good night,
Old age should burn and rave at close of day;
Rage, rage against the dying of the light.

Though wise men at their end know dark is right,
Because their words had forked no lightning they
Do not go gentle into that good night.

Good men, the last wave by, crying how bright
Their frail deeds might have danced in a green bay,
Rage, rage against the dying of the light.

Wild men who caught and sang the sun in flight,
And learn, too late, they grieved it on its way,
Do not go gentle into that good night.

Grave men, near death, who see with blinding sight
Blind eyes could blaze like meteors and be gay,
Rage, rage against the dying of the light.

And you, my father, there on the sad height,
Curse, bless, me now with your fierce tears, I pray.
Do not go gentle into that good night.
Rage, rage against the dying of the light.

In the beginning was the three-pointed star,
One smile of light across the empty face,
One bough of bone across the rooting air,
The substance forked that marrowed the first sun,
And, burning ciphers on the round of space,
Heaven and hell mixed as they spun.

In the beginning was the pale signature,
Three-syllabled and starry as the smile,
And after came the imprints on the water,
Stamp of the minted face upon the moon;
The blood that touched the crosstree and the grail
Touched the first cloud and left a sign.

In the beginning was the mounting fire
That set alight the weathers from a spark,
A three-eyed, red-eyed spark, blunt as a flower,
Life rose and spouted from the rolling seas,
Burst in the roots, pumped from the earth and rock
The secret oils that drive the grass.

In the beginning was the word, the word
That from the solid bases of the light
Abstracted all the letters of the void;
And from the cloudy bases of the breath
The word flowed up, translating to the heart
First characters of birth and death.

In the beginning was the secret brain.
The brain was celled and soldered in the thought
Before the pitch was forking to a sun;
Before the veins were shaking in their sieve,
Blood shot and scattered to the winds of light
The ribbed original of love.