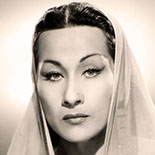 She became an international success based on her extreme vocal range, which was said to be “well over four octaves” and was sometimes claimed to span even five octaves at her peak. Yma Sumac recorded an extraordinarily wide vocal range of slightly over four octaves from B2 to C♯7 (approximately 123 to 2270 Hz). She was able to sing notes in the low baritone register as well as notes above the range of an ordinary soprano. Both low and high extremes can be heard in the song Chuncho (The Forest Creatures) (1953). She was also apparently able to sing in an eerie “double voice”.

In 1954 classical composer Virgil Thomson described her voice as “very low and warm, very high and birdlike”, noting that her range “is very close to four octaves, but is in no way inhuman or outlandish in sound”. In 2012, audio recording restoration expert John H. Haley favorably compared Sumac’s tone to opera singers Isabella Colbran, Maria Malibran and Pauline Viardot. He described Sumac’s voice as not having the “bright penetrating peal of a true coloratura soprano”, but having in its place “an alluring sweet darkness …virtually unique in our time”.