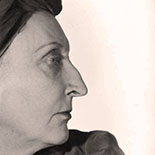 Dame Edith Louisa Sitwell (September 7, 1887 – December 9, 1964) was a British poet and critic and the eldest of the three literary Sitwells.

Like her brothers Osbert and Sacheverell, Edith reacted badly to her eccentric, unloving parents, and lived for much of her life with her governess. She never married, but became passionately attached to the homosexual Russian painter Pavel Tchelitchew, and her home was always open to London’s poetic circle, to whom she was unfailingly generous and helpful. Sitwell published poetry continuously from 1913, some of it abstract and set to music. With her dramatic style and exotic costumes, she was sometimes labelled a poseur, but her work was also praised for its solid technique and painstaking craftsmanship.

Beneath the flat and paper sky
The sun, a demon’s eye,
Glowed through the air, that mask of glass;
All wand’ring sounds that pass

Seemed out of tune, as if the light
Were fiddle-strings pulled tight.
The market-square with spire and bell
Clanged out the hour in Hell;

The busy chatter of the heat
Shrilled like a parakeet;
And shuddering at the noonday light
The dust lay dead and white

As powder on a mummy’s face,
Or fawned with simian grace
Round booths with many a hard bright toy
And wooden brittle joy:

The cap and bells of Time the Clown
That, jangling, whistled down
Young cherubs hidden in the guise
Of every bird that flies;

And star-bright masks for youth to wear,
Lest any dream that fare
–Bright pilgrim–past our ken, should see
Hints of Reality.

Upon the sharp-set grass, shrill-green,
Tall trees like rattles lean,
And jangle sharp and dissily;
But when night falls they sign

Till Pierrot moon steals slyly in,
His face more white than sin,
Black-masked, and with cool touch lays bare
Each cherry, plum, and pear.

Then underneath the veiled eyes
Of houses, darkness lies–
Tall houses; like a hopeless prayer
They cleave the sly dumb air.

Blind are those houses, paper-thin
Old shadows hid therein,
With sly and crazy movements creep
Like marionettes, and weep.

Tall windows show Infinity;
And, hard reality,
The candles weep and pry and dance
Like lives mocked at by Chance.

The rooms are vast as Sleep within;
When once I ventured in,
Chill Silence, like a surging sea,
Slowly enveloped me.

Still falls the Rain—
Dark as the world of man, black as our loss—
Blind as the nineteen hundred and forty nails
Upon the Cross.

Still falls the Rain
With a sound like the pulse of the heart that is changed to the hammer-beat
In the Potter’s Field, and the sound of the impious feet

On the Tomb:
Still falls the Rain

In the Field of Blood where the small hopes breed and the human brain
Nurtures its greed, that worm with the brow of Cain.

Still falls the Rain
At the feet of the Starved Man hung upon the Cross.
Christ that each day, each night, nails there, have mercy on us—
On Dives and on Lazarus:
Under the Rain the sore and the gold are as one.

Still falls the Rain—
Still falls the Blood from the Starved Man’s wounded Side:
He bears in His Heart all wounds,—those of the light that died,
The last faint spark
In the self-murdered heart, the wounds of the sad uncomprehending dark,
The wounds of the baited bear—
The blind and weeping bear whom the keepers beat
On his helpless flesh… the tears of the hunted hare.

Still falls the Rain—
Then— O Ile leape up to my God: who pulles me doune—
See, see where Christ’s blood streames in the firmament:
It flows from the Brow we nailed upon the tree

Deep to the dying, to the thirsting heart
That holds the fires of the world,—dark-smirched with pain
As Caesar’s laurel crown.

Then sounds the voice of One who like the heart of man
Was once a child who among beasts has lain—
“Still do I love, still shed my innocent light, my Blood, for thee.”