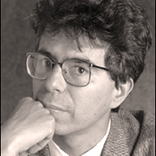 His honors include the Andrew Carnegie Medal, the United States Award of the International Poetry Forum, The Nation/”Discovery” Prize, and the Bess Hokin Prize and the Levinson Award from Poetry magazine. He has also received fellowships from the California Arts Council, the Guggenheim Foundation, and the National Endowment for the Arts.

The first time I walked
With a girl, I was twelve,
Cold, and weighted down
With two oranges in my jacket.
December. Frost cracking
Beneath my steps, my breath
Before me, then gone,
As I walked toward
Her house, the one whose
Porch light burned yellow
Night and day, in any weather.
A dog barked at me, until
She came out pulling
At her gloves, face bright
With rouge. I smiled,
Touched her shoulder, and led
Her down the street, across
A used car lot and a line
Of newly planted trees,
Until we were breathing
Before a drugstore. We
Entered, the tiny bell
Bringing a saleslady
Down a narrow aisle of goods.
I turned to the candies
Tiered like bleachers,
And asked what she wanted—
Light in her eyes, a smile
Starting at the corners
Of her mouth. I fingered
A nickel in my pocket,
And when she lifted a chocolate
That cost a dime,
I didn’t say anything.
I took the nickel from
My pocket, then an orange,
And set them quietly on
The counter. When I looked up,
The lady’s eyes met mine,
And held them, knowing
Very well what it was all
About.
Outside,
A few cars hissing past,
Fog hanging like old
Coats between the trees.
I took my girl’s hand
In mine for two blocks,
Then released it to let
Her unwrap the chocolate.
I peeled my orange
That was so bright against
The gray of December
That, from some distance,
Someone might have thought
I was making a fire in my hands.

How strange that we can begin at any time.
With two feet we get down the street.
With a hand we undo the rose.
With an eye we lift up the peach tree
And hold it up to the wind—white blossoms
At our feet. Like today. I started
In the yard with my daughter,
With my wife poking at a potted geranium,
And now I am walking down the street,
Amazed that the sun is only so high,
Just over the roof, and a child
Is singing through a rolled newspaper
And a terrier is leaping like a flea
And at the bakery I pass, a palm,
Like a suctioning starfish, is pressed
To the window. We’re keeping busy—
This way, that way, we’re making shadows
Where sunlight was, making words
Where there was only noise in the trees.