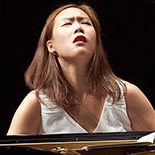 She first drew international attention when she appeared as a soloist with the New York Philharmonic Orchestra under the baton of Lorin Maazel in 2004. Her awards include the Silver Medal at the International Tchaikovsky Competition 2011, in which she also received the Best Chamber Concerto Performances and the Best Performance of the Commissioned Work.