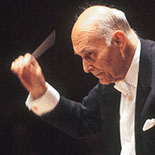 Solti is best known for his appearances with opera companies in Munich, Frankfurt and London, and as a long-serving music director of the Chicago Symphony Orchestra. Born in Budapest, he studied there with Béla Bartók, Leo Weiner and Ernő Dohnányi. In the 1930s, he was a répétiteur at the Hungarian State Opera and worked at the Salzburg Festival for Arturo Toscanini. His career was interrupted by the rise of the Nazis, and because he was a Jew he fled the increasingly restrictive anti-semitic laws in 1938. After conducting a season of Russian ballet in London at the Royal Opera House he found refuge in Switzerland, where he remained during the Second World War. Prohibited from conducting there, he earned a living as a pianist.

After the war, Solti was appointed musical director of the Bavarian State Opera in Munich in 1946. In 1952 he moved to the Frankfurt Opera, where he remained in charge for nine years. He took West German citizenship in 1953. In 1961 he became musical director of the Covent Garden Opera Company, London. During his ten-year tenure, he introduced changes that raised standards to the highest international levels. Under his musical directorship the status of the company was recognized with the grant of the title “the Royal Opera”. He became a British citizen in 1972.

In 1969 Solti was appointed music director of the Chicago Symphony Orchestra, a post he held for 22 years. He restored the orchestra’s reputation after it had been in decline for most of the previous decade. He became the orchestra’s music director laureate on his retirement in 1991. During his time with the Chicago orchestra, he also had shorter spells in charge of the Orchestre de Paris and the London Philharmonic Orchestra.