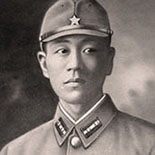 Shōichi Yokoi (March 31, 1915 – September 22, 1997) was a Japanese sergeant in the Imperial Japanese Army during the Second World War. He was among the last three Japanese holdouts to be found after the end of hostilities in 1945, discovered in the jungles of Guam on January 24, 1972, almost 28 years after US forces had regained control of the island in 1944.

When American forces captured the island in the 1944 Battle of Guam, Yokoi went into hiding with ten other Japanese soldiers. Seven of the original ten eventually moved away and only three remained in the region. These men separated but visited each other until about 1964, when the other two died in a flood. The last eight years Yokoi lived alone.

Yokoi survived by hunting, primarily at night. He used native plants to make clothes, bedding, and storage implements, which he carefully hid in his cave.

On the evening of January 24, 1972, Yokoi was discovered in the jungle by Jesus Dueñas and Manuel De Gracia, two local men checking their shrimp traps along a small river on Talofofo. They had assumed Yokoi was a villager from Talofofo, but he thought his life was in danger and attacked them. They managed to subdue him and carried him out of the jungle with minor bruising. 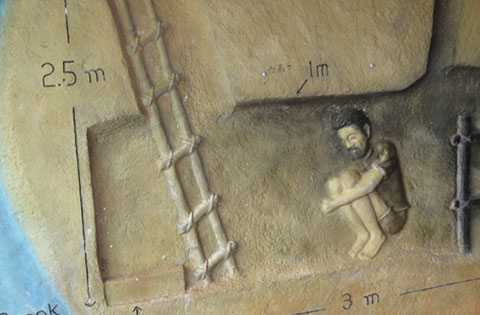 For twenty-eight years, he had hidden in an underground jungle cave, fearing to come out of hiding even after finding leaflets declaring World War II had ended, believing them to be false Allied propaganda. 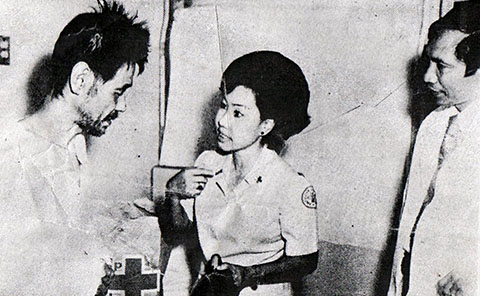 “It is with much embarrassment, but I have returned”, he said upon his return to Japan. The remark would become a popular saying in Japanese. Yokoi became a popular television personality and an advocate of austere living. He eventually received the equivalent of US $300 in back pay, and a small pension.

Although he never met Emperor Hirohito, while visiting the grounds of the Imperial Palace, Yokoi said, “Your Majesties, I have returned home … I deeply regret that I could not serve you well. The world has certainly changed, but my determination to serve you will never change.”

Yokoi died in 1997 of a heart attack at the age of 82, and was buried at a Nagoya cemetery, under a gravestone that had originally been commissioned by his mother in 1955, after Yokoi had been officially declared dead.