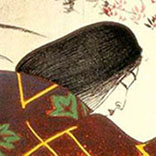 Izumi Shikibu (b. 976) was a mid Heian period Japanese poet. She is a member of the Thirty-six Medieval Poetry Immortals.

She was the contemporary of Murasaki Shikibu and Akazome Emon at the court of Joto Mon’in, and was perhaps the greatest poet of her time.

Izumi Shikibu had a sequence of affairs at the court in the capital. In the beginning, before her marriage to Michisada, she is believed to have been the companion (some accounts say wife) of a man named Omotomaru at dowager Queen Shoko’s court. While still married to Michisada, she fell madly in love with Emperor Reizei’s third son, Prince Tametaka (977–1002) and had a public affair; as a result of the scandal she was divorced by her husband and disinherited by her father. That Tametaka died because he visited Shikibu during the plague season became the prevailing mythology of this affair.

After Tametaka’s death, she was courted by Prince Atsumichi (981–1007), a half brother of Tametaka. The first year of this affair is described in the semi-autobiographical novel Diary of Izumi Shikibu like many Diaries of this period, the narration in Izumi Shikibu Nikki is in the third person, and parts of it are certainly fiction. It is believed that Shikibu’s motive in writing this diary was partly to explain her affair to her fellow courtiers. Like before with Tametaka, this affair also soon ceased to be secret, and Atsumichi’s real wife left his house in anger. Shikibu moved into Atsumichi’s residence, and the two had a very public courtship until Atsumichi’s death in 1007 at the age of 27.

In contemporary arts, the National Opera of Paris and the Grand Theater of Geneva jointly commissioned an opera based on her poems. Titled “Da Gelo a Gelo” by Salvatore Sciarrino and sung in Italian, the work draws on 65 poems from Izumi Shikibu Nikki that features her passion for Prince Atsumichi. It was performed in early 2008 by the Grand Theater of Geneva with the Chamber Orchestra of Geneva.

Her life of love and passion earned her the nickname of The Floating Lady (ukareme) from Michinaga.

In the autumn, on retreat at a mountain temple

Although I try
to hold the single thought
of Buddha’s teaching in my heart,
I cannot help but hear
the many crickets’ voices calling as well.

As I dig for wild orchids
in the autumn fields,
it is the deeply-bedded root
that I desire,
not the flower.

In this world
love has no color—
yet how deeply
my body
is stained by yours.

Lying alone,
my black hair tangled,
uncombed,
I long for the one
who touched it first.

My black hair tangled
as my own tangled thoughts,
I lie here alone,
dreaming of one who has gone,
who stroked my hair till it shone.

On the fifth day of the month, while offering incense at the front of the temple

My body’s actions
speak of wanting to ride
a cloud to the Western Paradise—
why is it my heart
calls only North, towards you?

The dewdrop
on a bamboo leaf
stays longer
than you, who vanish
at dawn.

Seeing you is the thread
that ties me to this life—
If that knot
were cut this moment,
I’d have no regret.

Those nights when we slept
behind love’s
jeweled screen,
were we even aware of
the opening dawn skies?

Left behind
to grow old in this world
without you,
the flowers I pick lose their beauty,
dyed with dark ink.

Undisturbed,
my garden fills
with summer growth—
how I wish for one
who would push the deep grass aside

My lover, though he had broken off our affair, asked me not to replace the pillow we had slept on. My reply:

Well, just now I’m not sure
if I’ll change my pillow
or not,
though I might decide
by watching you change your heart!