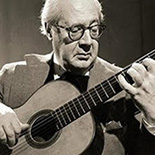 Segovia’s contribution to the modern-romantic repertoire not only included commissions but also his own transcriptions of classical or baroque works. He is remembered for his expressive performances: his wide palette of tone, and his distinctive musical personality, phrasing and style.