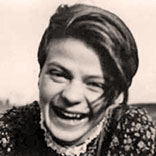 Sophia Magdalena Scholl (May 9, 1921 – February 22, 1943) was a German student and revolutionary, active within the White Rose non-violent resistance group in Nazi Germany.

She was convicted of high treason after having been found distributing anti-war leaflets at the University of Munich with her brother Hans. As a result, they were both executed by guillotine. 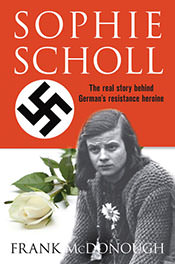 Since the 1970s, Scholl has been celebrated as one of the great German heroes who actively opposed the Third Reich during the Second World War.

Scholl was brought up a Lutheran. She entered junior or grade school at the age of seven, learned easily, and had a carefree childhood. In 1930, the family moved to Ludwigsburg and then two years later to Ulm where her father had a business consulting office.

In 1932, Scholl started attending a secondary school for girls. At the age of twelve, she chose to join the Bund Deutscher Mädel (League of German Girls), as did most of her classmates, but her initial enthusiasm gradually gave way to criticism. She was aware of the dissenting political views of her father, of friends, and also of some teachers. Political attitude had become an essential criterion in her choice of friends. The arrest of her brothers and friends in 1937 for participating in the German Youth Movement left a strong impression on her.

She had a talent for drawing and painting and for the first time came into contact with a few so-called “degenerate” artists. An avid reader, she developed a growing interest in philosophy and theology. Her firm Christian belief in God and in every human being’s essential dignity formed her basis for resisting Nazi ideology.

In spring 1940, she graduated from secondary school, where the subject of her essay was, “The Hand that Moved the Cradle, Moved the World”. Being fond of children, she became a kindergarten teacher at the Fröbel Institute in Ulm-Söflingen. She also had chosen this kindergarten job hoping that it would be recognized as an alternative service to Reichsarbeitsdienst (National Labor Service), a prerequisite to be admitted to the university. This was not the case, though, and in spring 1941 she began a six-month stint in the auxiliary war service as a nursery teacher in Blumberg. The military-like regimen of the Labor Service caused her to think very hard about the political situation as well as to begin practicing passive resistance.

After her six months in the National Labor Service, in May 1942, she enrolled at the University of Munich as a student of biology and philosophy. Her brother Hans, who was studying medicine there, introduced her to his friends. Although this group of friends eventually was known for their political views, they initially were drawn together by a shared love of art, music, literature, philosophy, and theology. Hiking in the mountains, skiing, and swimming were also of importance to them. They often attended concerts, plays, and lectures together.

In Munich, Scholl met a number of artists, writers, and philosophers, particularly Carl Muth and Theodor Haecker, who were important contacts for her. The question they pondered the most was how the individual must act under a dictatorship. During the summer vacation in 1942, Scholl had to do war service in a metallurgical plant in Ulm. At the same time, her father was serving time in prison for having made a critical remark to an employee about Hitler.

In the People’s Court before Judge Roland Freisler on February 22, 1943, Scholl was recorded as saying these words:

Somebody, after all, had to make a start. What we wrote and said is also believed by many others. They just don’t dare express themselves as we did.

On February 22, 1943, Scholl, her brother Hans, and their friend Christoph Probst were found guilty of treason and condemned to death. They were all beheaded by a guillotine by executioner Johann Reichhart in Munich’s Stadel 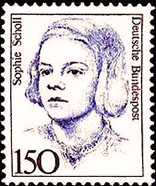 heim Prison only a few hours later, at 17:00 hrs. The execution was supervised by Walter Roemer, the enforcement chief of the Munich district court. Prison officials, in later describing the scene, emphasized the courage with which she walked to her execution. Her last words were:

How can we expect righteousness to prevail when there is hardly anyone willing to give himself up individually to a righteous cause. Such a fine, sunny day, and I have to go, but what does my death matter, if through us, thousands of people are awakened and stirred to action?

Fritz Hartnagel was evacuated from Stalingrad in January 1943, but did not return to Germany before Sophie was executed. He later married Sophie’s sister Elisabeth.