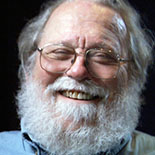 He is best known for comedy albums featuring music written by Schickele, but which he presents as being composed by the fictional P. D. Q. Bach. He also hosted a long running weekly radio program called Schickele Mix. Schickele made a brief foray into cinema with the Bruce Dern film Silent Running (1972), for which he composed the musical score and co-wrote the original songs “Silent Running” and “Rejoice in the Sun” with the late Diane Lampert.