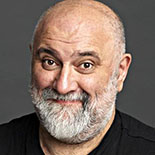 He was voted the 18th greatest stand-up comic on Channel 4’s 100 Greatest Stand-ups in 2007. Much of Sayle’s humor is in the tradition of Spike Milligan and Monty Python, with riffs based on absurd and surreal premises. His act is noted for its cynicism and political awareness, as well as physical comedy.